This week the “Walcott Community News” brings back the “Who’s Who In Walcott” column with an interview with Albert Illian.  At the age of 26, Albert bought 160 acres southwest of Walcott.  A year later, in 1907, he married Emma Soenke and brought her to the farm for their honeymoon.  The farm itself, when it was purchased, had few major improvements, so the new family began to make changes.  In 1909, a crew of men built a new barn and between 1909 and 1910 the windmill was added to the farm.  Thank you to Alberta Bernick for the photo below. 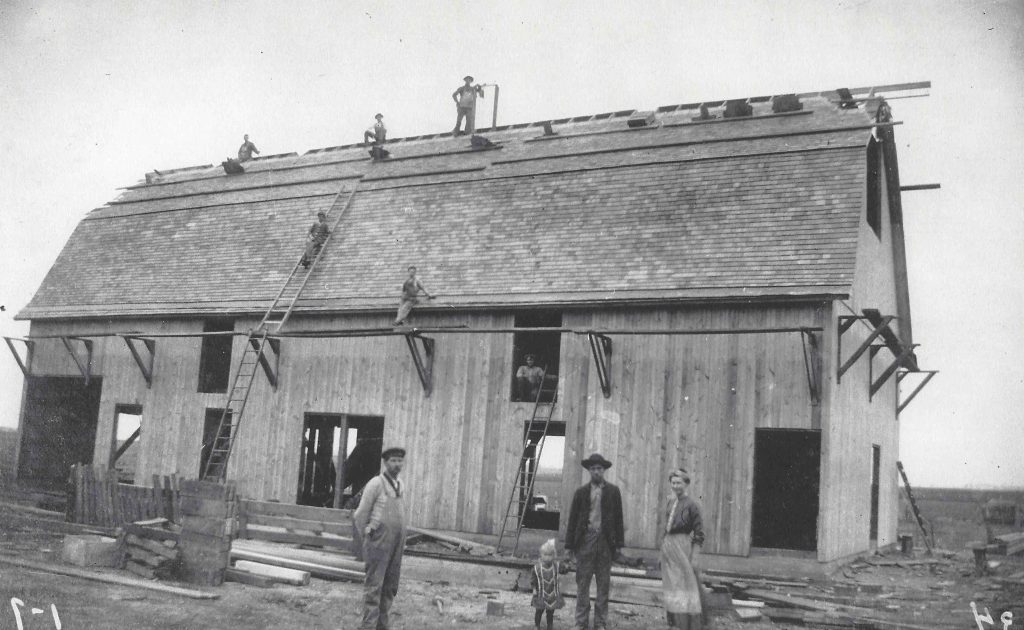 In 1914, the Illian farm was awarded first place in the Scott County Farm Improvement League’s home improvement contest.  The League was created in 1912 to promote new agricultural practices and farm life within the State of Iowa.  Scott County received $1,000.00 from the U.S. Department of Agriculture towards employing a crop expert and promoting better farming methods. 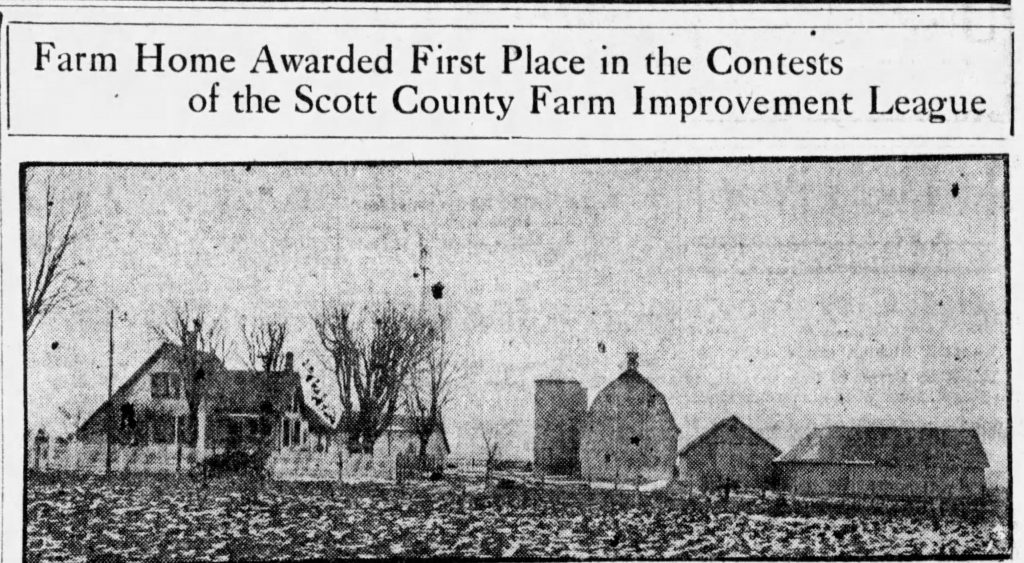 HOME OF ALBERT ILLIAN
“The farm home of Albert Illian, three miles south of Walcott and barely  inside the Scott county line, was picked by the judges in the home improvement contest for first place.  The home was awarded near maximum in arrangement of buildings, interior of home, orchard, garden and lawn.”

Tuesday, August 1, 1944
The Daily Times
The Daily Times carried an article about the Illian farm being featured in the August, 1944 issue of Successful Farming. 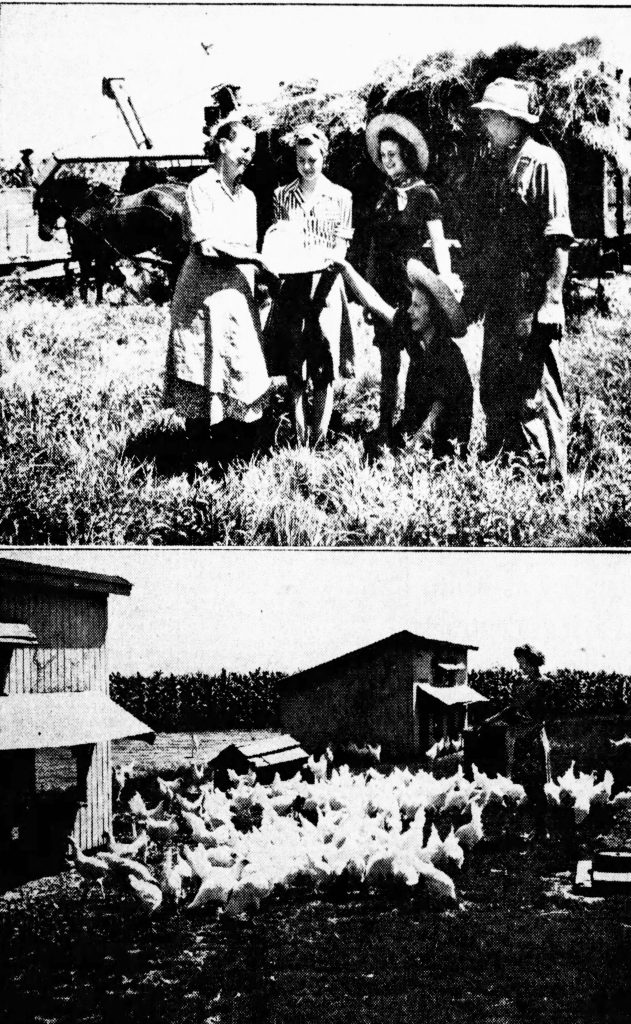 “Introducing the Illians–The Albert Illian family of Walcott, can be listed high among the successful farming families of Scott county.  In the current issue of Successful Farming, considerable space is given to the activities of this well known family, consisting of father, mother and six daughters.  The Illian girls long ago learned the finer points of farming and are as invaluable to their dad today as an equal number of sons would be.  The girls have all, in their turn, been active members of 4-H clubs.  Today the youngest of the sextet, Alberta and Leona are hard working members of the Blue Grass Sunshine Workers.  Albert is county vice-president and was recently elected state historian, an office held by her sister, Mrs. Elnora McAllister at one time.  Mr & Mrs Illian have resided on the same farm since the day of their marriage.  There is a large, comfortable home, flower and vegetable gardens and modern buildings for the livestock and poultry.  Shown above are pictures taken by Successful Farmer on this modern Scott county farm.  The top picture shows Mrs Illian passing out cool lemonade to the workers in the field which consist, left to right, of Mrs Illian, Mrs McAllister, Leona, Alberta (seated) and Mr Illian.  Alberta is shown below helping with the large flock of chickens to be found on the farm.” 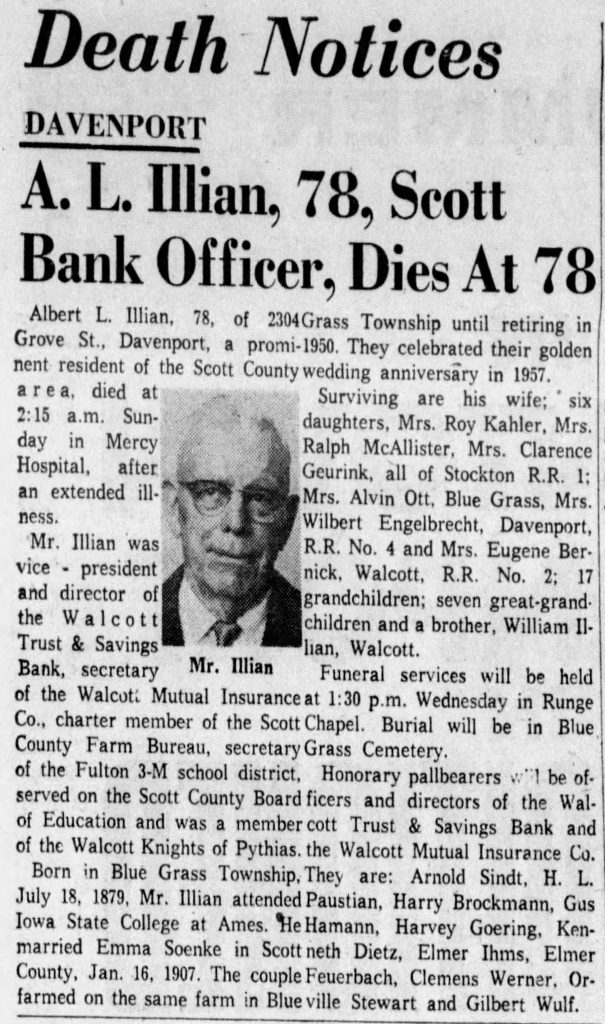 Remember to click the link above to view this week’s “Walcott Community News” newspaper!