It’s a new year and the “Walcott Community News” continues with their special “Who’s Who in Walcott” column.  This week Dr. Henry Schumacher is featured.  In 1904, he built the Castle for his home, office and a meeting hall upstairs for the Knights of Pythias.  Remember to click on the highlighted link above to view the full newspaper. 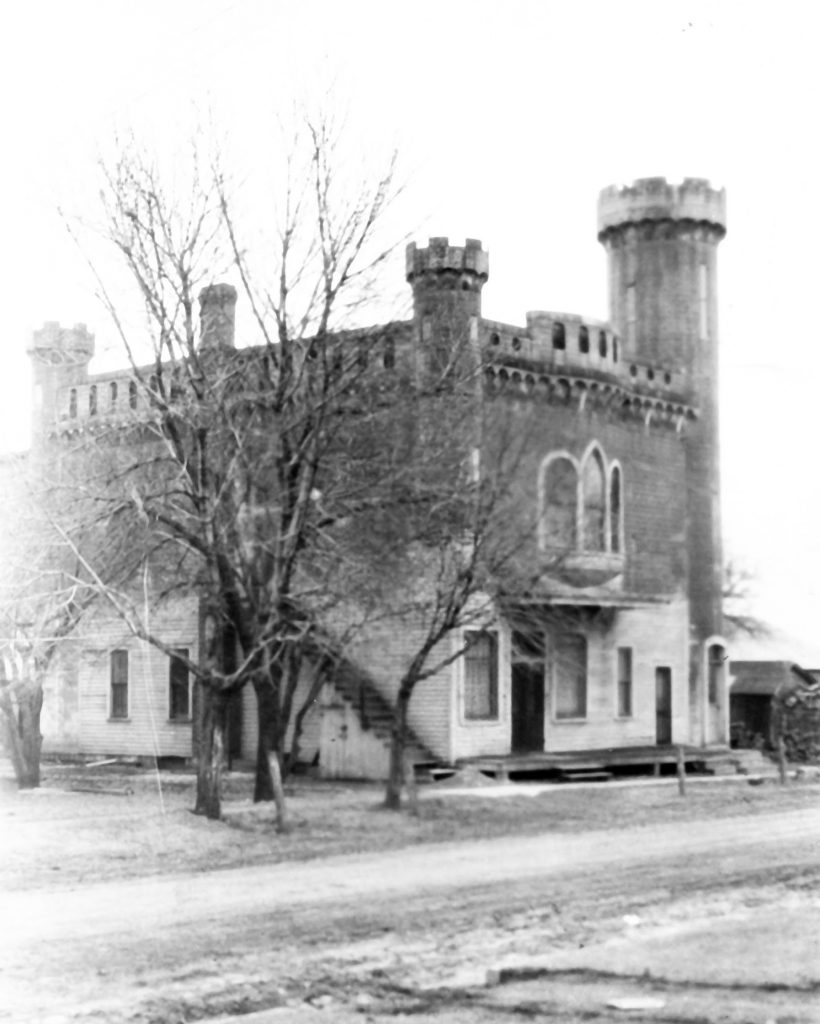 Pictured below is a photo of Dr. Schumacher and his apothecary shop located in the Castle. 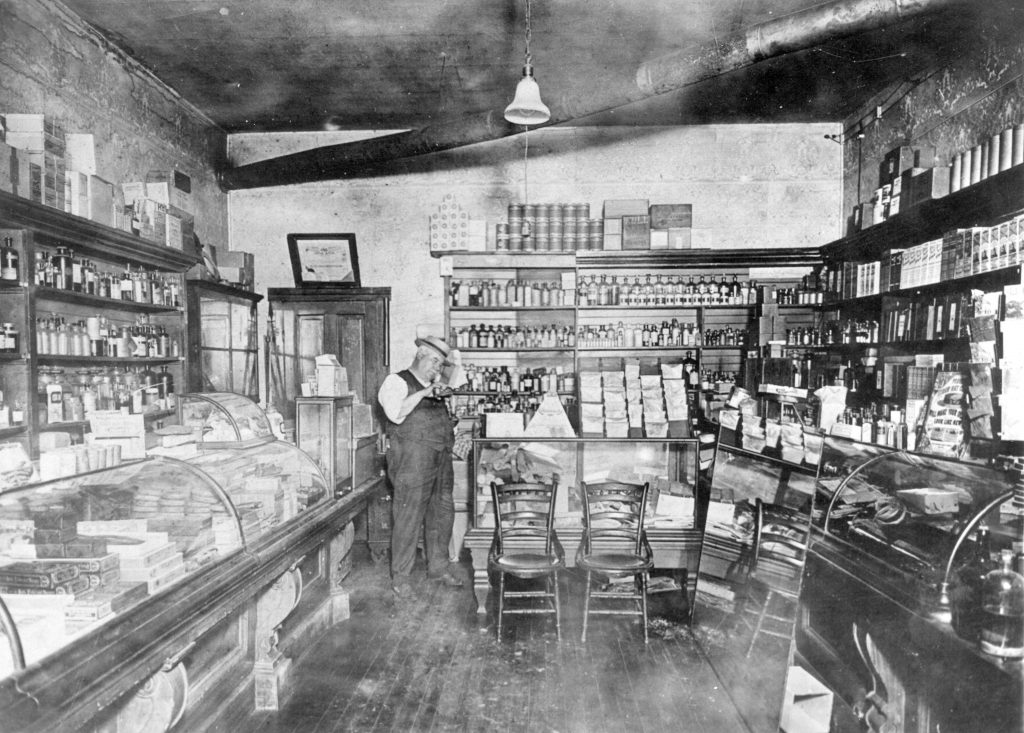 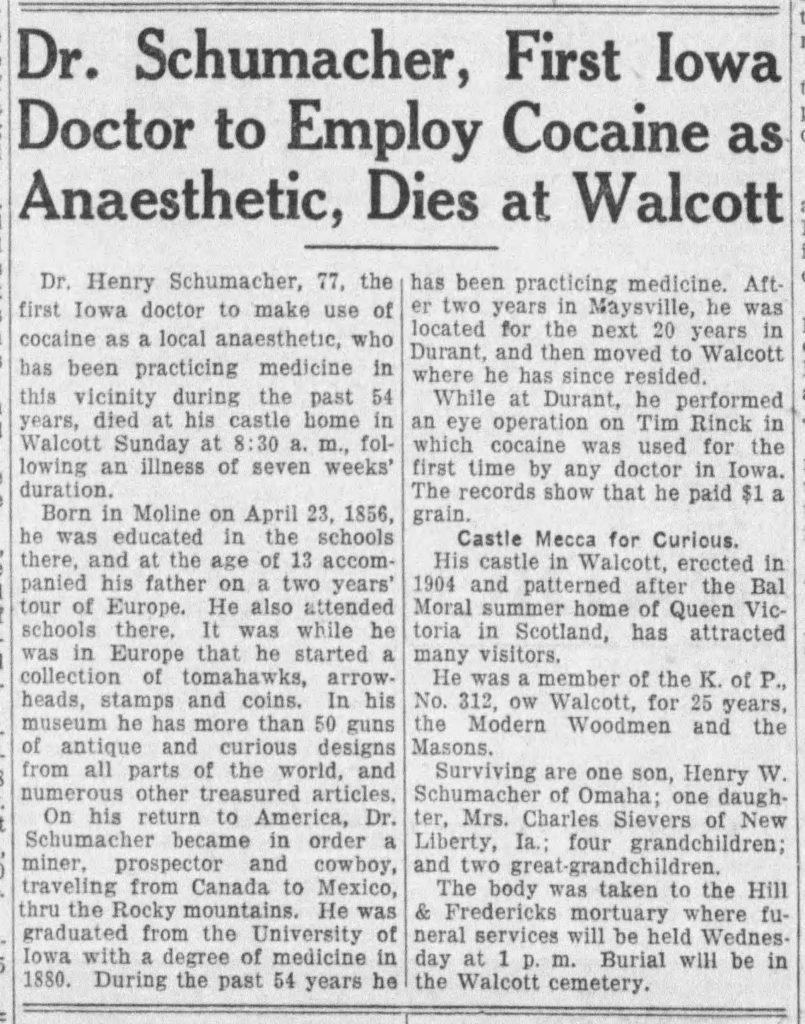 Among the worthy representatives of the medical profession in Walcott who are meeting with success in their chosen life work is numbered Dr. Henry Schumacher, who has also been closely identified with the public interests of this city during the period covering his residence here. A native of Illinois, he was born in Moline on the 23d of April, 1856, and is a son of Henry A. and Helena M. (Heuer) Schumacher. The father, who was born in Eutin, Germany, on the 24th of February, 1818, came to America in 1849, at once going to California with a party of gold seekers. In 1852 he went to Illinois, locating in Moline, where he was engaged in the butchering business until 1869. In 1853, in Moline, he was united in marriage to Mrs. Helena M. Heuer, who was also a native of Germany, her birth occurring in Pretz on the 30th of August, 1817.

For nine years Dr. Henry Schumacher of this review was a pupil in the public schools of Moline, and then accompanied his father on a visit to
Germany, where, for two years he attended school in Eutin. Upon his return from Germany he entered Griswold college in 1871, remaining there until 1873, and then went west, where for six years he was engaged in prospecting and mining. The year 1879 witnessed his return home, after which he became a student at the Iowa State University, from which he was graduated in the spring of 1882. In the meantime, he had pursued a medical course and during the scholastic year 1881-82 had served as interne at Mercy Hospital, thus receiving excellent practical training. After completing his college course, he returned to Moline and there took charge of the smallpox cases for the county. He remained in that place for only two months, however, and then went to Durant, where he followed his profession for nineteen years. On the 24th of December, 1899, he came to Walcott and has since made this place his home, continuing in the practice of medicine to the present time. Since opening up an office here he has gained a very large and representative patronage which is constantly increasing in volume and importance, and he is now numbered among the well-known and prominent practitioners of this county. He is not only thoroughly conscientious in the discharge of his various duties, full recognizing the obligations that rest upon him in connection with his chosen calling, but keeps in close touch with the work of advancement and progress which is constantly being carried on in the medical world, being a member of the American Medical Association, the Iowa State Medical Society, the Scott County Medical Society, the Tri City Medical Society and the Muscatine County Society of Physicians & Surgeons.  He has ever remained an earnest student, continually broadening his knowledge by extensive reading and research, and everything that tends to solve the mystery which we call life is of intense interest to him.  Dr. Schumacher has been twice married. In 1883 he wedded Miss Laura Krabbenhoeft, who only lived for three months, however, and in 1884 he chose as his second wife Miss Rosa Steffen. The marriage has been blessed with two children, namely: Henry Walter, attending school in Moline; and Helena M., a resident of Durant. Dr. Schumacher is well known in fraternal circles, holding membership in Doric Lodge, No. 319, A. F. & A. M., of Moline; Zarepath Consistory of Davenport; Knights of Pythias lodge, No. 312, of Walcott; Walcott lodge, No. 3479, M. W. A.; the royal Neighbors; and the Fraternal Order of Eagles. In all of these organizations he is active and prominent.

Although he has attained a high place in his profession in this community, Dr. Schumacher is almost equally well known because of his deep and helpful interest in public affairs. Stalwart in his allegiance to democratic principles, during his residence in Durant he was mayor of that city for two terms, also served as coroner of Cedar county for two terms and like-wise was pension examiner under President Cleveland. His fellow citizens in Walcott have also recognized his ability and worth and have called him to important offices of honor, electing him mayor of the town, in which office he served during the years 1905-6-7. He has also been school director and is at present acting as justice of the peace, and in all instances has proven himself a very capable and efficient official, thoroughly justifying the faith placed in him by his fellow townsmen.

Dr. Schumacher is the owner and proprietor of Castle Hall, the lodge building of Walcott, and has gained considerable prominence throughout the locality as an enthusiastic relic hunter, having in his possession some very interesting articles. He is the owner of a very valuable museum containing hundreds of Indian relics of all kinds, and also has a rare collection of stamps presented to him by a Danish prince, Ferdinand of Glucksburg, of which he is justly proud. He is likewise the possessor of a very fine collection of coins, containing thousands of pieces, some of which are hundreds of years old.