The “Walcott Community News” is continuing with their feature “Who’s who in Walcott” by spotlighting a farmer, Rudolph Stoltenberg, from the early pioneer family of Heinrich Stoltenberg.  Heinrich’s father was Hans Stoltenberg, a farmer, who immigrated to Scott County, Iowa in June of 1847.  Also on the same ship manifest were other well-known local area names.

Many German immigrants became very involved with their local community as illustrated in Rudolph Stoltenberg’s obituary and the article about bringing electricity to Cleona Township that are below.  Also, take note of the article about John Tank on the front page of the newspaper.

Did you know Walcott had a basketball team and that it was formed by the Walcott Community Club?  Check the names in the newspaper…they may be your relatives.  Below is an article about a winning game.

At the bottom of the front page of the newspaper, be sure and notice the mustache growing contest.  We will hear more about it later. 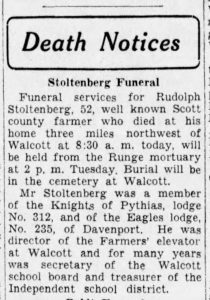 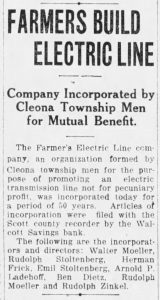