The editor of this week’s “Walcott Community News” has started a new column entitled “Who’s Who In Walcott.”  For the next few months the paper will each week highlight a citizen of the Walcott community.  This first week we are introduced to Dick Leabo (Albert Thomas Leabo) who was born Jan 12, 1897 in Walcott.

Do you know what a “port sider” is in baseball?  He was a well known one.  Do you know what Bean-O is?  The Walcott Tavern ad on the 4th page of the newspaper advertises this.  Dick was also a mayor of Walcott.  Do you know what one of the duties of a mayor is?  The answers are in the articles below and also at the bottom of this page.  Click on the link above to read this week’s newspaper 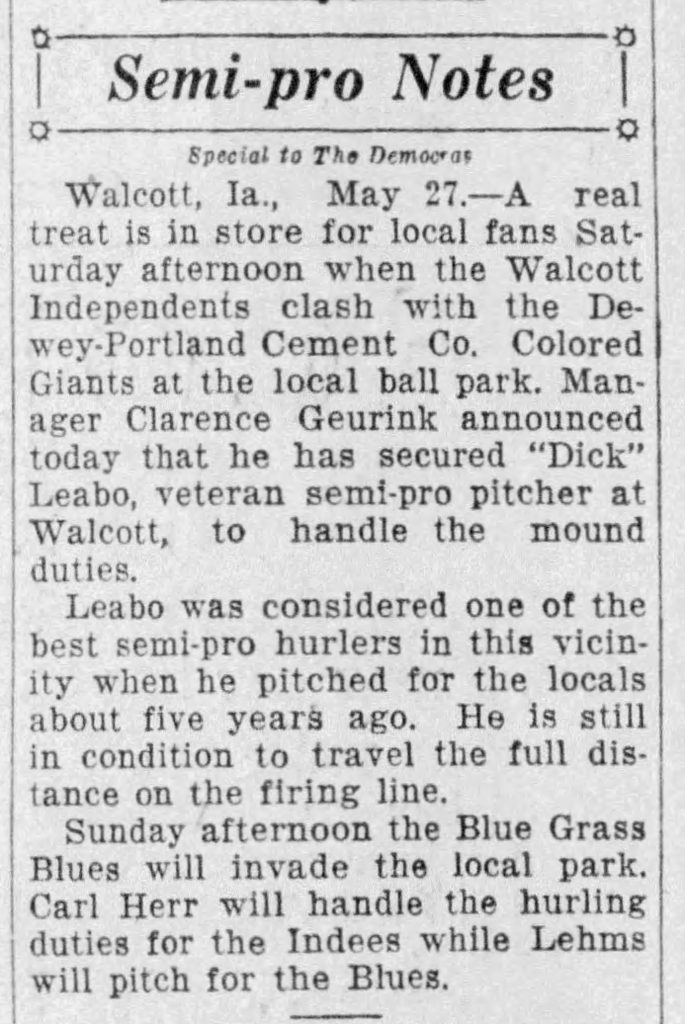 A “Port Sider” is a left handed baseball pitcher.

Bean-O as defined by SmartCasinoguide.com:
It is believed that this game initially started around the 1530s in Italy as the Italian lottery, Il Gioco del Lotto d’Italia. The players had cards with numbered squares on them and the lucky numbers were drawn out of a sack.

From Italy, the game spread to France in the late 1770s. It was called Le Lotto there and was played among the wealthy Frenchmen. Le Lotto players received printed cards that were separated into 27 squares in a layout of 3 rows and 9 columns. Five squares in each row had numbers from 1 through 90 in random arrangements, which led to the modern design.  Again, the numbers were drawn from a sack and the winner would be the first person to have a fully-covered horizontal row.

In the 18th century the game is believed to have migrated to Great Britain and by the 19th century a game like this was widely played in Germany to teach children spelling, math, animal names and even history.

By the early 1920s, Beano, a game of chance, was introduced by entrepreneur Hugh J. Ward. He created and standardized this game at carnivals in and around Western Pennsylvania. Players received a row of numbers and placed beans over their numbers as they were called out. They yelled “beano” if they won.  The game was further spread by New York salesman Edwin S. Lowe. In 1929, at a carnival near Atlanta, he saw people playing a game called Beano and following Ward’s rules, with dried beans, a rubber stamp and cardboard sheets.

The origins of the name Bingo are unknown, but may date to the middle 1920s. There is a legend that one of Edwin S. Lowe’s friends was so excited to have won in this game that she yelled out “bingo” instead of “beano”. So Lowe renamed it Bingo because he had to change the name of the game in order to make it uniquely his. The modern Bingo card was patented by Edwin S. Lowe in 1942.

Click on the link at the top to read the full newspaper.