“All aboard for Walcott.”—Tomorrow a special train of cars will leave this city at 9 o’clock A.M. for the town of Walcott, first depot on “Davenport and Council Bluffs Railroad,” where an auction sale of town lots will be held; the terms of sale, we understand, are quite liberal, presenting good inducements to persons wishing to locate in business, etc. There are improvements already established there, and others in contemplation that will cause Walcott to soon become an important point. Many of our readers have undoubtedly observed the magic-like progress of the stations on the line of the Chicago and Rock Island Road; places that a year and a half ago resembled Walcott in its present primitive state, but are now depots of commercial importance, surrounded by a country rapidly improving, receiving its impulse from the sparks of enterprise cast along its course from the nostrils of the “Iron horse.” Persons wishing to attend the sale will be accommodated with free tickets by applying to Cook & Sargent.

We were one of a party of about five hundred persons who left Davenport on Saturday last at 9 o’clock A.M. to visit the first station on the Mississippi and Missouri Railroad and on the first trip ever made by passenger cars on this road.  The evening previous two passenger cars had been transferred to this side of the Mississippi and five open cars used for transporting iron, had been made to readiness for passengers by seating them with chairs and settees and surrounding them with a temporary railing.  These, propelled by the good locomotives LeClaire and Iowa, with their accompanying tenders, constituted the first passenger train ever run over the Mississippi and Missouri Railroad.  A band of music added to the interest of the occasion, which was heightened by the presence of some fifty or seventy-five ladies.

Very promptly at the specified time the cars started on their first mission across the prairies of Iowa.  The ascent of 150 feet below town was accomplished on the temporary track with facility and the cars emerged on the open prairie, giving to some their first view of the open country back of Davenport.  The most important fact connected with the construction of the Railroad that struck the minds of the passengers, was the case with which the cars passed over the track.  Customarily on new roads, until the road-bed gets settled by much traveling, the jostling of the cars is excessive, but so compactly had the superstructure been made and so firmly the iron been spiked to the ties, that the cars glided over the rails as smoothly as though the road had been in use many months.

Arriving at their destination about 10 o’clock, the passengers were welcomed by a number of persons, who either had preceded them or were residents of Walcott.  Proceeding to the Walcott House, the ladies there found ample accommodations, while the gentlemen repaired to a convenient spot to engage in the mission that had brought them thither, which was to purchase at public auction the lots yet remaining unsold on the town plat of Walcott.  Mr. H. Kilbourn, the popular auctioneer, mounted a rostrum and with that happy faculty he possesses of showing the good points of anything he wishes to dispose of to the highest bidder, soon had lots in Walcott selling at from $200 to $250 each.  These were choice lots, however, and they soon depreciated in price until from $100 to $150 were the ruling rates and outlets even went so low as from $50 to $75.

Leaving the scene of the real estate operations, in company with a friend we ascended to the observatory of the Walcott House.  From this elevated position we had an extended view of the prairies around for many miles.  Away off in the distance could be seen groves of trees, some of which were in Muscatine and others were in Cedar county, while here and there were farms under cultivation, twenty-five of which could be enumerated.  There are many thousands of acres of land within sight, as you stand on the summit of the Walcott House, that are yet in the same condition as when roamed by the Indians in pursuit of the buffalo; but ere many years roll away this land will all be brought in subjection to man and be made to yield prolifically of the rich fruits of the earth.  At one time this season eight breaking plows could be seen at work from this site.

At noon those who were fortunate enough to have the company of ladies, or impudent enough to crowd themselves in to the exclusion of the gentler sex, seated themselves at the first diner table.  So soon as they had all supplied themselves plentifully with the good things placed before them and made their egress from the dining room, there was a general move among the outsiders towards the door, but it was closed after the ladies, and the hungry expectants waited with much patience and many a good humored, if not witty remark, for its re-opening as a signal for their entrance.  Carried along by the force of the outward pressure we found ourself in a large room with two tables its entire length well loaded with good substantial provisions, before which we were not slow to seat ourself and prepare to do ample justice.  But as eating is rather a commonplace affair anyhow, we shall barely allude to the circumstance, merely to say, that it seemed to be the united opinion, so far as we heard an expression, that Mr. Myers, the proprietor of the Walcott House, sustained the reputation he had already acquired of providing a good table.

Assuming the occasion to “earn an honest penny,” several of our citizens had conveyed to the ground, melons, fruits, pies, etc. and erected booths where they disposed of their edibles to those who tired of waiting or concluding their chances slender for a dinner at the Walcott House, were constrained to satisfy their hunger in this primitive style.

After dinner, while some proceeded to the spot chosen for the continuance of the sale of five acre out-lots, others of the more juvenile remained to accompany the ladies in paying their respects to Terpsichore.  These out-lots ranged in price from $125 to $200 each, low enough should Walcott never grow any larger, one would think, to justify the remark of Mr. Kilbourn, “Where is the man that ever purchased lands in Iowa who did not find them enhanced  in value.”  Some twenty five of these out-lots having been disposed of, the sale was finished and the passengers returned to the cars precisely at 4 o’clock and started homeward amid the cheers of those we left behind us.

In addition to the Walcott House, which was erected last year at an expense of $6,000, there are some eight or ten frame houses in the town.  The Railroad Company intend immediately erecting a large depot building while an extensive grain warehouse and a number of dwelling houses and shops will soon follow.  Two individuals have it in contemplation to build a grist mill at this point, as no doubt from the quantity of wheat raised in the surrounding country it will be a very desirable location for such an establishment.

Returning we passed a house on the prairie that had been erected in our absence—a further proof of the progress with which our western prairies are settling.  A few years hence and the many acres of land lying between this place and Walcott, now in a wild and uncultivated condition, will teem with all the varied productions of the rich and arable soil of Iowa.  As one continuous farm it will present fields of wheat and corn, and pastures of tame grass browsed by the cattle from a thousand hills.  Our party returned in the best of spirits, all well pleased with the recreation of a delightful day, and some gratified with the reflection of being proprietors, at a reasonable rate, of lots in the first depot town on the Mississippi and Missouri Railroad. 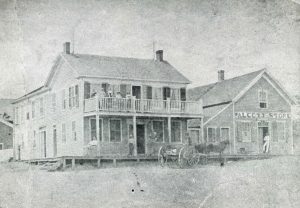 According to the 1954 Walcott Centennial book, Bernard Schwarting’s store is pictured on the right.  The building on the left is believed to be the original “Walcott House”, established in May of 1854 by Jacob Myers and used to provide board and lodging for the railroad workers.  The two buildings in the photo were located on the current Walcott Bank site.